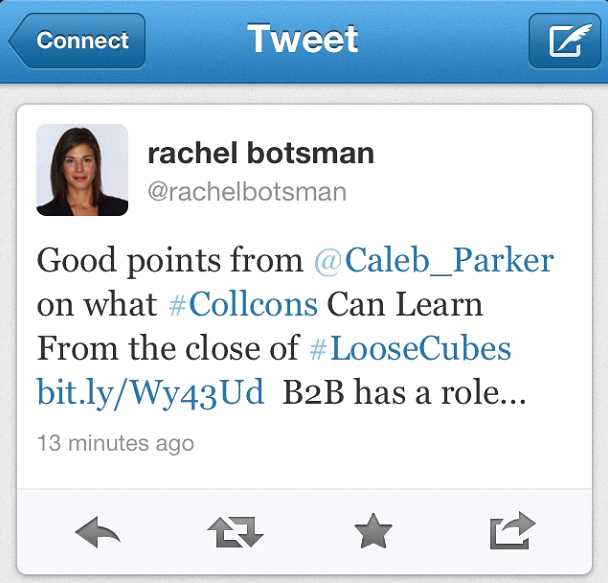 As co-founder & CEO of a startup in the collaborative consumption economy, I believe it’s time someone stood up for #CollCons and talk about what can be learned from the death of Loosecubes.

I’ve been answering questions from the media, investors, suppliers, customers and others about how the Loosecubes closing affects my business model and the collaborative consumption model altogether.  While I completely understand the logic behind these questions, it’s important for everyone to take a deep breath and learn from this failure.  One bad business plan didn’t just kill an entire industry.

Only the Loosecubes management team and investors can tell the world what prompted the decision to close, but I’ll venture to speculate on the cause of their demise.  I’ve paid close attention to the company since their launch.  They recognized the growing numbers of mobile workers and were great at building a community.  Unfortunately they failed to understand the pain points of the customers who were willing to pay for their service.  Further, they failed to implement a proper monetization strategy.

Loosecubes wanted to play under bridges and be happy at work, which is fine. But most people want to grow their careers and build their businesses so they can enjoy more time with their families.

I’ve found that mobile workers want on-demand access to private professional spaces where they can focus without distractions, they want something close to home or wherever they are (so they don’t waste time commuting) and they want consistency.  These folks are smart people who recognize the opportunity to save tons of money by not paying for a space they’re not in every day.  But they aren’t just looking for something cheap or free. While the LooseCubes peer-to-peer (P2P) model offered savings, the consistent professional atmosphere was lacking.

Which brings me to my next point.  When people use the term collaborative consumption, it seems they tend to focus on peer-to-peer models. While P2P is becoming very popular and disruptive, the model is not always consistent.  Don’t get me wrong, as a frequent user of Airbnb, I’m a fan of the P2P model.  But it’s not perfect for business everytime.  People reserving space on LooseCubes with one organization could not expect the same professional atmosphere or level of service with the next organization they booked.  Many of the mobile professionals I’ve talked to would not book a space within a random company’s business, especially to meet with someone.

However, CollCons as a business-to-consumer (B2C) model can solve the inconsistency problem.

Companies implementing B2C collaborative consumption enable their customers to share ‘widgets’.  The widget becomes a service, or rather use of the widget does.  Instead of buying the widget from the company, customers share usage of it.

This concept isn’t new.  Let’s look at ZipCar & Uber for example.  They’ve grown their respective brands by executing the B2C CollCons model.  Their customers share the use of cars and have access to them on-demand in real-time.  ZipCar owns their inventory, while Uber vets their drivers (suppliers) and only partner with those who consistently deliver excellent service.  Since we’re talking B2C versus P2P, one can expect the same level of service every time they fire up their mobile apps.  These companies solved a problem for their customers and monetized it.

So, to those who wonder if collaborative consumption, or CollCons of commercial real estate, will go the way of LooseCubes, I have a question for you:  Did the mobile workforce disappear on November 16, 2012?  Of course not!  More people are adopting the flexible work model every day because they are most productive when they are free to work wherever and whenever they want.  In fact, the serviced office industry already has the B2C CollCons solution ready to serve them.

Companies across numerous industries who adopt the B2C CollCons model will succeed – as long as they back their brand with superior service and a consistent customer experience, of course.  P2P companies can succeed as well, if they learn from the demise of LooseCubes.